Last week, the Villanova Wildcats defeated the Carolina Tar Heels in the championship game of the NCAA Basketball Tournament. Both teams played with brilliance and passion. Indeed, it was the most exciting Championship game anyone can remember: there were countless lead changes and the result literally came down to the final moments of the game.

With 11 seconds remaining, UNC was down by three. Marcus Paige, the veteran Carolina guard, attempted an ugly, contested three point shot, which miraculously found the basket, tying the game. With 4.5 seconds left, Villanova guard Ryan Arcidiacono drove the ball down the court and passed it to Kris Jenkins, who launched and made a buzzer beating three pointer, winning the game and shocking millions of viewers. It was one of the great finishes in the history of the NCAA Basketball Tournament, one of those moments that reminded me why I enjoy watching sports.

The most compelling moment of the Villanova victory, however, took place off the court. After the game, correspondent Tracy Wolfson interviewed Roy Williams, Carolina’s highly decorated head coach. Though these post-game interviews are a standard and often tedious part of the sports viewing experience, full of platitudes and cliches, there was something different about this one. 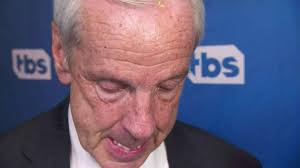 Williams’ face was red and swollen; it was clear he had barely composed himself for this interview. As he fought back tears, he told Wolfson, “I’ve been a head coach for 28 years, and the worst thing on a loss like this is I feel so inadequate.” It was a moment of searing honesty and undeniable truth. Carolina played brilliantly. They “left it all out on the floor,” as the saying goes. They shot astonishingly well (65%) from the three point line in spite of being the worst three point shooting team in the history of the school. They even made a nearly miraculous shot to tie the game with seconds left. In other words, they did everything right! Yet they still lost the game. No wonder Coach Williams felt inadequate. He was bereft, because everything he implicitly understood about the game of basketball and about life had come crashing down. After being asked what he said to his team in the locker room, Williams mused, “I just talked, I mean…nothing, because you can’t say anything.”

In his letter to the Philippians, Paul describes his life before he had his experience of God’s grace: “If anyone else has reason to be confident in the flesh, I have more: circumcised on the eighth day, a member of the people of Israel, of the tribe of Benjamin, a Hebrew born of Hebrews; as to the law, a Pharisee; as to zeal, a persecutor of the church; as to righteousness under the law, blameless.” Paul had everything going for him. He was doing everything right. He was more than adequate; he was confident that he could make himself worthy of God’s favor with his accomplishments. “Yet,” he continues, “whatever gains I had, these I have come to regard as loss because of Christ. More than that, I regard everything as loss because of the surpassing value of knowing Christ Jesus my Lord.” There was a moment in Paul’s life when he realized that in spite of all his accomplishments, he was inadequate. There was a moment when everything Paul understood about the world came crashing down. In this moment, Paul had to locate his trust, not in his own ability, but in the grace that had been made known to him in Jesus Christ.

Ironically, the most eloquent moment of the interview with Roy Williams was when he admitted that there was nothing he could say to his players in the face of their loss. With this admission, Williams uncovered a fundamental truth: when we come face to face with our inadequacy, words fail us. Several years ago, the Diocese of North Carolina released a video featuring the Right Reverend Michael Curry, who is currently the Presiding Bishop of the Episcopal Church. At one point, Bishop Curry describes what it’s like to bring Holy Communion to those on the margins of life. “What do you say to a person who is dying?” he asks. “What do you say to a person who is on death row? What do you say to a person that is addicted to a life that’s destroying them? I don’t have the words and you don’t. But Jesus does.” That is the gospel. As Roy Williams demonstrated last week, there are moments in our lives when words will fail us, when accomplishments will fail us, when our carefully constructed self-image will come crashing down. The only thing that will not fail, that cannot fail is the grace that has been made known to us in Jesus Christ.