The last place one expects to find grace is in long lists of our failings.

On Ash Wednesday in the Episcopal Church, after ashes are imposed and we are reminded of our mortality, the entire congregation kneels to recite the Litany of Penitence.  While Episcopalians are used to corporate confession (in most churches, prayers of confession are recited nearly every Sunday), the one we recite on Ash Wednesday is particularly intense.  Not only do we confess our sin to God; we also confess to one another “and to the whole communion of saints in heaven and on earth.”  The prayer then proceeds with a comprehensive acknowledgment of our collective propensity to do wrong.  We confess our unfaithfulness, hypocrisy, self-indulgence, anger, envy, love of worldly goods, and negligence in prayer and worship.  It is, in many ways, a classic vice list that doesn’t really leave any penitential stone unturned.

At approximately the midpoint of this damning list, however, we are called to confess “our failure to commend the faith that is in us.”  Here, in the midst of all this talk about our wretchedness and the depravity of human nature, we are reminded that there is a part of us that is faithful, that there is a part of us that wants to return to God and put our trust in God’s grace.  Too often, we convince ourselves that we couldn’t possibly be faithful enough to be part of a body of believers.  Too often, we convince ourselves that our moments of doubt prevent us from being accepted by a Christian community.  Too often, we convince ourselves that there is no way God could love us in light of our faithlessness.  This attitude, however, misses not only the boundless and gracious love of God, but also the faith that lingers within us, the faith that may have languished over the last months and years but is ready to be cultivated, the faith that is a gift from God we are called to nurture.

I pray that the season of Lent may be a time when you will recognize the faith that is in you and use that faith to trust in the God who loves you.

During the invitation to a holy Lent on Ash Wednesday, we are reminded that Lent was historically “a time when those who, because of notorious sins, had been separated from the body of the faithful were reconciled by penitence and forgiveness, and restored to the fellowship of the Church.”  Lent was meant to be a time when those who had injured the community through their actions could be restored to the church and forgiven of their past wrongdoing.  We see this kind of community discipline described in Scripture.  In 1 Corinthians 5, Paul describes a situation in which an unrepentant sinner needs to be removed from the community for a time.  In Matthew 18, Jesus lays out a very specific formula for community discipline that could result in a person’s temporary exclusion from the church.  The important thing to realize is that in both of these examples, the sinner was not permanently excluded from the Christian community, but would eventually be reintegrated into the life of the church.  The body would eventually look beyond a person’s notorious and damaging past actions and embrace that person as he entered a new life of grace.

While there are some churches that still have such forms of community discipline in place, they are rarely used.  When these forms of discipline are used, it seems like the sinner’s exclusion from the community is not a temporary measure, but will probably last for a lifetime.  This is symptomatic of a wider trend in our culture.  Whenever politicians are caught in indiscretions or celebrities are exposed doing something wrong, they will invariably offer a public and tearful apology.  And for the most part, we refuse to recognize even the possibility that they are repentant.  We assume that their penitence is insincere and that their apology is just a media ploy.  There are certainly public figures who only apologize to placate the public, but I have a hard time believing that every apology we hear on television is completely insincere.  We are in danger of becoming so jaded about the penitence of public figures that we won’t be able to recognize apologies from those who are closest to us. 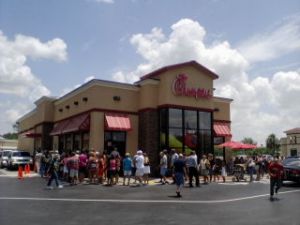 As you probably remember, there was a dust-up this summer about fast food giant Chick-fil-A’s support of a variety of anti-gay causes.  There were boycotts by the gay community and its allies, while conservative groups organized to eat more of the chain’s chicken sandwiches.  A nasty, public, and frankly annoying debate raged for several weeks on message boards, talk radio, and cable news.  Behind the scenes, however, Dan Cathy, the COO of Chick-fil-A, was reaching out to the gay community.  In an article published in January, Shane Windmeyer, a gay-rights activist, told the story of how he got to know Dan Cathy.  Evidently, Cathy wanted to understand how his stance was hurtful, and if possible, he wanted to make amends.  I’ll let you read the article, but as a result of his conversations with Windmeyer, Cathy withdrew his support from the most divisive organizations.  Windmeyer makes it very clear that Cathy didn’t change his position; he changed a behavior that had been destructive of relationships and community.

The most striking part of this article to me was the comments section.  Just after Windmeyer told a story of dialogue, mutual understanding, and dare I say penitence, people responded by telling the activist that he was being played, that Dan Cathy had reached out to him for the sole purpose of improving Chick-fil-A’s image.  While I was saddened to read these jaded responses, I was hardly surprised.  We live in a culture where penitence is suspect and apologies are dubious.  As Christians, however, we are called to be countercultural.  We are called to trust in a person’s penitence.  We are called to trust that those who have recognized the destructiveness of their behavior and changed it must be welcomed back into the community, regardless of what they have done in the past.  Lent is an opportunity for us to think about those people we have not been able to forgive, to think about those people we have excluded from our lives, and to bring them back into the fold.  It isn’t easy for us to get over the mistrust that has been so deeply engrained by our culture.  But we can move forward, confident that, no matter how notorious our wrong, it is God who is reconciling us to each other.