I am a baseball fan. I love almost everything about the game: the way that it puts me in touch with my childhood, the way that it juxtaposes the urban and the pastoral, the way that it creates its own sense of time in an overly-scheduled world. I find, however that the most compelling thing about baseball is the way that it lends itself to story and narrative. The great Bart Giamatti, baseball’s resident philosopher during his brief tenure as its commissioner, noted that the game can be divided into three acts (3 x 3 innings) that enact a fundamental human drama: the journey of life that takes us through perils and challenges as we strive to make our way home.

Unlike the dramas of stage and screen, baseball encourages and requires the participation of the audience. Those assembled in the stands of the ballpark function much like a Greek chorus, punctuating and narrating the events unfolding before them with cheers, jeers, groans, and applause. The practiced ear can tell what is happening on the diamond just by listening to the sounds of the crowd: from the steady escalation of enthusiasm as a double play is turned to the collective sigh of disappointment as a 3-2 count results in a walk to the unbridled ecstasy of a well-hit home run ball. The sounds of baseball are crucial because they remind us that the game is not played in a vacuum, that it is meant to be a shared experience. The sounds of baseball testify to the fact that the story baseball enacts is our story, the story of a people trying to find their way home. 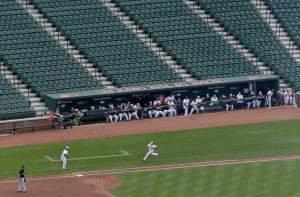 Yesterday, baseball was robbed of its power to tell this story. As a result of the recent unrest in Baltimore, the Orioles played the Chicago White Sox in an empty stadium. This game marked the first game that two teams have played without an audience of any kind. Naturally, it was a strange experience. Though the players pitched, fielded, and hit as usual, they gave the appearance that they had lost their reason for playing.

At first, I thought that closing Camden Yards to the public yesterday was a mistake, a missed opportunity. After all, sports have the almost unique ability to bring people together after terrible tragedies. The first Red Sox game after the Boston Marathon bombing, for instance, was a cathartic and unifying experience for the people of that beleaguered city. Surely, an Orioles win at Camden Yards would have galvanized the people of Baltimore and helped them to move beyond the events of the past several days.

As I thought about it more, however, I realized that it is not time for the people of Baltimore or any of us to move beyond the events of the last week. In our culture, our first instinct is to paper over our grief and pretend that our pain has gone away. When we do this, however, we fail to allow our grief to be transformed and to transform us. The crowdless game at Camden Yards may have been painfully necessary because it exposed the depth of Baltimore’s grief. As I watched yesterday’s game, I had an unavoidable and overwhelming sense of emptiness. I think that it is important for us to feel that emptiness. It is important for us to recognize that there are people in this country who have felt that emptiness for too long. The empty silence at Camden Yards was important to experience because it gave an opportunity for lament: lament for Freddie Gray, lament for injustice, lament for victims of violence everywhere.

Lament is an important and misunderstood part of the Christian experience. Perhaps the most well-known lament from Scripture is Psalm 22, which begins with the plaintive question: “My God, My God, why have you forsaken me?” It is the psalm that Jesus quotes from the cross in the gospels according to Matthew and Mark. It is a psalm that explores feelings of abandonment, loss, and emptiness. At the same time, it is about far more than the psalmist’s pain; it is a psalm that affirms the faithfulness of God. After the psalmist has recited all of the ways that he has felt abandoned, he writes, “I will tell of your name to my brothers and sisters; in the midst of the congregation I will praise you.” In Scripture, lament is not about despair, it is about acknowledging our grief before the One whose faithfulness is beyond our capacity to imagine. As we lament for Baltimore and for all victims of injustice, we are called to trust that God will transform our grief into hope. Moreover, we are called to use that hope to empower the leaders of our communities recognize that we are all part of the same story.

There was one sound at yesterday’s game that was new to even the most experienced baseball fan. Though the stadium was closed to the public, a small group of Orioles faithful gathered outside of the stadium to cheer on their team from afar. Towards the end of the game, the faint chant of “Let’s Go Os” grew more and more distinct. In the silence of grief and lament, this chant was a still, small voice of hope, a small token of our shared story, a reminder that we are called to find our way home together.