Lately, AT&T has been encouraging people to wait. 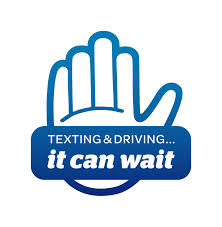 The phone giant has released ad campaign called “It Can Wait,” which exhorts people to pledge that they will refrain from sending or checking text messages while they are on the road.  The impulse for the campaign is both noble and necessary: texting while driving can impair reaction times six times as much as driving while legally intoxicated.  Thousands of people are killed on U.S. roads every year because they or other drivers were texting.  Naturally, the rationale for the campaign is quite simple: there is no need for me to respond to a text message as soon as I receive it.  I can wait until I’ve arrived safely at my destination.  Whatever I am being contacted about, in other words, it can wait.

Our failure to recognize that “it can wait” extends far beyond our insistence on immediate responses to text messages.  There is a general lack of patience, a corporate failure to wait that has become part of our culture over the past several decades.  In some ways, this is related to my previous comments about the fact that we need to remember the importance of Sabbath.  But this failure to wait also has a significant impact on our relationships with other people and with ourselves.  We tend to prize the quick response or witty retort in conversations, but we often forget to consider how what we say can impact the people around us.  This seems particularly true in Internet comment sections.  People are so concerned with responding to another comment with a pithy and sometimes acerbic retort that they forget there is another person behind the comment they just lampooned.  Moreover, people are so concerned with not taking themselves too seriously that their first inclination is to make a joke of everything that happens to them or that they participate in, thus robbing these experiences of any further significance.

Imagine how different our interactions with other people and our understanding of ourselves can be if we simply wait before we respond.  What if we waited before we provided a knee jerk reaction to a comment that makes our blood boil?  What if we took a moment and tried to make sense of an experience before we turned it into a joke?  What if our first response to other people was to wait and remember that they are created by God before we make fun of them for their beliefs?  I suspect that even these brief pauses allow us to begin seeing the world through God’s eyes.  Waiting allows us to recognize that we are all equal in the eyes of God.  So the next time you come up with exactly the right way to verbally harpoon someone who disagrees with you, remember that it can wait. 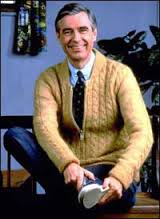 Last week was the late Fred Rogers’ birthday.  Though he needs no introduction, Mr. Rogers was a beloved television personality who hosted a popular children’s show called Mr. Rogers’ Neighborhood on PBS for more than 30 years.  Even by the standards of children’s programming on PBS, Mr. Rogers’ show seemed impossibly wholesome.  Every episode began the same way: after Mr. Rogers entered his home, singing his theme song, “Won’t you be my neighbor?”, he changed into sneakers and a zippered cardigan (all of which were hand knitted by his mother).  During the course of the show, Rogers would earnestly talk to his audience, interview live guests, take field trips to places like bakeries, and visit the “Neighborhood of Make Believe.”  Fred Rogers was so wholesome that he made Sesame Street look like Homicide:Life on the Street.

Conventional wisdom dictates that even if Mr. Rogers resonated with young children, his good-hearted message and milquetoast persona would become stale when those children reached adolescence and adulthood.  Nevertheless, Fred Rogers remains one of the most universally beloved characters in television history.  This was profoundly evident last week, as various outlets on the Internet acknowledged his birthday.  When the Internet celebrates public figures, there are almost always a few naysayers who write vitriolic and cruel things in the comment sections of the articles about that person.  Yet even as I combed through comment sections (something I generally do not like doing), I was hard-pressed to find anything negative about Mr. Rogers.  His appeal transcends even a forum where people castigate videos of generous and selfless acts, like a police officer giving boots to a homeless person.  One commenter summarized it well by saying, “Fred Rogers has tamed the Internet.”

We might wonder why Mr. Rogers is so beloved.  Some, pointing to his anachronistic approach, might claim that people are attracted to him because he seems like a product of a bygone era and represents something we wish we could still be.  The problem with this analysis is that it idealizes the past (always dangerous) and ignores the fact that most people are mocked if they act like it is still 1953.  Others might point to his genuineness: Fred Rogers behaved the same on-screen as he did off-screen.  While this is certainly a quality that will earn people’s respect, it does not necessarily lead to admiration.  After all, someone who is a jerk in public and a jerk in private could also be respected for his genuineness.  Mr. Rogers’ appeal is far simpler and far deeper: Fred Rogers believed that his primary responsibility in this life was to love others.  He went through every step of his life believing that everyone deserves to be loved, no matter who they are or where they come from or what they have done.  He didn’t do this with an agenda in mind.  His love for other people was never conditioned on a desired response or behavior.  Mr. Rogers loved without the expectation of results.

There is no question in my mind that Fred Rogers’ love for other people was shaped by his faith in the God who loved to the point of death.  As a Presbyterian minister, Mr. Rogers understood the deep logic of the atonement, the deep logic of the cross, the deep logic of the events that we commemorate this week: God loved us so much that God became a human being who was willing to suffer and die on the cross, even though he had been abandoned by those closest to him.  This love was unconditional; Jesus did not say, “Never mind” and turn back after Peter’s denial.  God loves us with a self-emptying, self-giving love that has the power to transform the world.  As we meditate on the events of Holy Week, we are called to put this love into practice, to love our fellow human beings without any expectation of reward, and to see everyone in the world, regardless of who they are, as our neighbor.