Sermon on Matthew 18:15-20 offered to the people of the Church of the Redeemer in Bryn Mawr, Pennsylvania.  Audio for this sermon can be found here. 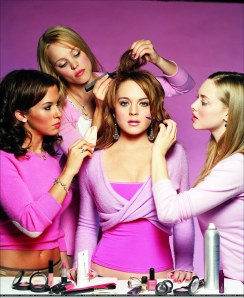 In 2004, Paramount Pictures released Mean Girls, a comedy about the perils of attending high school during the first decade of the new millennium.  Starring Lindsay Lohan before she became a tabloid headline, Mean Girls is, in many ways, a typically trite teen comedy; the protagonist succumbs to the temptations of cliques and cattiness only to realize that the coolest thing she can be is herself.  What sets Mean Girls apart from other films in its genre is the writing.  The movie is endlessly quotable, and nowhere is this truer than the scene in which Lohan’s character eats lunch with the popular clique known as “the Plastics” for the very first time.  One of the other girls, Gretchen, explains the rules that members of this clique must follow: Plastics wear pink on Wednesdays, Plastics can’t wear tank tops two days in a row, Plastics can only wear ponytails once a week, Plastics can only wear jeans or track pants on Friday.  After reciting this litany of requirements, Gretchen warns about the consequences of violation: “If you break any of these rules, you can’t sit with us at lunch.”  This scene is meant to show the audience the superficiality of the Plastics; the ludicrousness of excluding someone from a group for wearing sweatpants is supposed to make us laugh.  And yet, if we’re honest, every group establishes rules that members must follow in order to remain part of the community.  Establishing such rules is a way of ensuring that the community can function properly, a way of reducing conflict, a way of understanding who we are.

We see an example of a set of such rules in our gospel reading for today.  These rules deal with the management of interpersonal conflict among the group of first-century Christians to whom Matthew wrote his gospel.  Now, Matthew’s was a diverse community of Jews and Gentiles, those who had grown up following the Law of Moses and those who had never heard of Moses, those who kept kosher and those who ate what they wanted.  With such a diversity of backgrounds, conflict was, to some extent, inevitable.  As we all know, it is difficult for a community to function when members are clashing with one another.  There are a variety of different strategies that leaders use to deal with this kind of conflict.  As the leader of a church community, Matthew, like the Plastics, seems to assume that those who persistently and unrepentantly disrupt the social order ought to be removed from the community, though he is concerned with offenses more significant than not wearing pink on Wednesday.  The evangelist recalls Jesus’ instructions for dealing with conflict in the church and as we heard this morning, our Lord spells out the procedure pretty explicitly: if another member of the church sins against you, take him aside and talk to him about it.  If that doesn’t work, bring two or three other people to see if they can get through to him.  If he still refuses to repent, bring him before the whole community, and if the person fails to respond even to the whole church, “let such a one be to you as a Gentile and a tax collector.”  Jesus, in other words, seems to say that those who persistently and unrepentantly sin against other members of the community ought to be removed from the body of the faithful.  Far from the pettiness of a high school clique, this whole process assumes that the actions of the one being excommunicated have become destructive of the very fabric of the community.  Not only that, excommunication requires a rigorous due process: the offender is given three distinct opportunities to make things right before they are shunned by the church.  In Matthew’s community, people are not excommunicated for light and transient causes.  Nevertheless, it is sometimes necessary to make the hard decision: to exclude those who disrupt the social order in order to maintain unity within the church.

There’s a level at which I think we can really understand this.  We have all been in situations where we have seen a single person cause problems for an entire community.  There’s the person at work who refuses to pull his weight, who piggybacks on other people’s successes and shifts blame when he is at fault.  There’s the friend who selfishly takes advantage of her relationships and somehow manages to make every gathering a symposium on her personal problems.  There’s the family member whose self-destructive behavior has yielded only frustration and shame for those closest to him.  Often, these people will continue in these behaviors no matter how much we cajole or threaten or beg.  It seems that Matthew was dealing with his own version of these issues.  In these seemingly intractable situations, Jesus himself appears to indicate that we ought to remove these people from the community so that those of us who remain can live and work in harmony.

But notice how Jesus frames the sentence of excommunication: if you aren’t able to get this guy to repent, “let such a one be to you as a Gentile and a tax collector.”  Now, this seems like a fairly definitive condemnation.  After all, for a Jewish audience, Gentiles and tax collectors are among the most hated people in first-century Palestine.  Labeling someone as a Gentile or tax collector means that person is naturally excluded from the fellowship of those who worship the God of Israel.  But remember that Matthew’s community includes Gentiles.  Remember that Jesus himself calls a tax collector named Matthew to be his disciple.

Remember that at the end of Matthew’s gospel, Jesus enjoins the disciples to go into the world and make disciples of all nations, literally “all of the Gentiles.”  Gentiles and tax collectors, in other words, are those whom we are called to embrace, those with whom we are called to reconcile, those to whom we are called to proclaim the abundant and redemptive love of God made known to us in Jesus Christ.  For Matthew’s community and indeed for the whole Church, the door is never closed; there is always an opportunity for even the most notorious sinners, even those who persistently reject the community, even the Gentiles and tax collectors to be brought back into the fellowship of Christ’s body.

Who are the Gentiles and tax collectors in our lives?  Who have we excluded because of their repeated failure to meet our expectations?  Is it the lazy coworker, the selfish friend, or the shameful family member?  Or is it someone else?  Have we excluded ourselves because we believe that what we have done cannot be forgiven?  The gospel calls us to look within ourselves, to discern who we are excluding from our lives, and to reach out to those people and open ourselves to the possibility of reconciliation.  We may not get anywhere, we may be rejected for our efforts, but we worship a God who reached out to us while we were still sinners, while we were rejecting God.  We are called to be persistent, to remember that Christ does not willingly exclude anyone from the fellowship of his body, to live our lives deeply aware of how inclusive God’s love really is.

Today’s post is going to be brief, as I not only have to put the finishing touches on a sermon, but also need to watch (need!) a very close national semifinal game between the Florida Gators and the Connecticut Huskies (go UConn!).

Though I’ve been watching the game on TBS, I’ve noticed that there are two other broadcasts available: one for Florida fans and one for UConn fans.  Presumably, the Florida broadcast will include commentators with a rooting interest in the Gators, while the UConn broadcast will feature people transparently supporting the Huskies.  It occurs to me that the existence of these team-specific options is symptomatic of a wider trend in our culture today.  Our society has become fragmented; we tend to spend time only with people we agree with and listen only to people who share our worldview.  This is part of the reason for the proliferation of news networks that cater to people of a particular political bent.  We would rather pretend that everyone agrees with us than engage in the challenging work of listening to people who do not share our views.

This is not a new issue.  The early Church had to deal with a huge variety of perspectives and understandings about how to be faithful to God: Should Christians be required to keep the Law of Moses?  Who has the authority to speak for the Church?  What should we do with people who have committed notorious sins?  Much of the New Testament is devoted to dealing with these questions.  In some cases, like in the letters of John, the solution is to exclude those who do not share the majority view.  In most other cases, however, we see the Church struggling to hold a variety of perspectives in tension, to include as many people as possible, and to recognize that unity can exist even with diversity.

In the Church (and the world) we must remember that we can be in relationship with one another even when we disagree or root for different teams.  Ultimately, we are called to recognize that our unity is grounded not in anything we have done, but in what God has done for us in Jesus Christ.