Sermon on Romans 14:1-12 offered to the people of the Church of the Redeemer in Bryn Mawr, Pennsylvania. 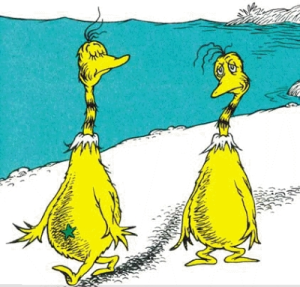 “Now, the Star-Belly Sneetches had bellies with stars. The Plain-Belly Sneetches had none upon thars.” So begins The Sneetches, Dr. Seuss’s 1961 book about creatures who looked identical, apart from the presence of small green stars on their bellies. As Dr. Seuss explains, “those stars weren’t so big. They were really so small you might think such a thing wouldn’t matter at all. But, because they had stars, all the Star-Belly Sneetches would brag, ‘We’re the best kind of Sneetch on the beaches.’” It’s a familiar story, one that really gets going when a fly-by-night huckster named Sylvester McMonkey McBean comes to town with two machines: one that will affix stars to Sneetch bellies and another that will remove them, both for a small fee. As Dr. Seuss observes, “from then on, as you can probably guess, things really got into a horrible mess.” The Sneetches paid to have stars affixed and stars removed until they ran out of money and, more importantly, had no idea who was originally a Plain-Belly Sneetch or a Star-Belly Sneetch. Dr. Seuss’s point is clear: while the differences between us may seem significant, they are ultimately inconsequential.

This is a lesson that most of us tend to learn at a young age, which is not all that surprising, since Dr. Seuss wrote children’s books. At the same time, there are ways that this message can feel naive when we consider the complexity of our world. Certainly, the superficial differences between us are less important than we tend to think. Though I am a Red Sox fan, I don’t actually think that Yankee fans are bad people. But sometimes there are fundamental questions of identity that can be very difficult to disregard. Occasionally, the values espoused by various individuals are irreconcilably opposed to one another. For instance, is it really possible for us to say that the difference between a white supremacist and someone who believes in racial equality is inconsequential? While the question of whether Sneetches have stars on their bellies or not is ultimately trivial, there do seem to be differences between us that are important to acknowledge.

At first glance, the disputes in the church in Rome that Paul addresses in this morning’s epistle reading do not seem to be of any consequence. When Paul describes the differences among members of the community, they seem as insignificant as the question of whether Sneetches have stars on their bellies or not: “some believe in eating anything, while [some] eat only vegetables” and “some judge one day to be better than another, while others judge all days to be alike.” The way that Paul frames these arguments makes them seem like a matter of mere personal preference. His advice seems to bear out this assumption. Paul essentially counsels that we should not judge how other people practice their faith. Whatever you decide to do, he says, do it in honor of the Lord. Otherwise, live and let live. After all, these differences aren’t all that important in the end.

While the questions of what we eat and which holidays we observe may not seem controversial to us, they were actually fundamental questions of identity in the first century. Those who ate only vegetables did so in order to avoid meat that had been sacrificed to idols. Idolatry, the human tendency to worship something in God’s place, is the chief sin in the Hebrew Bible, the one from which all other sins stem. So one can understand the desire of devout Jews to scrupulously avoid eating meat if there was even a small chance been used in the worship of something that was not God. In the meantime, those who ate anything weren’t entirely sure it was worth even considering the dangers of idolatry. What one eats, in other words, was far from a casual issue in a diverse community of Jews and Gentiles. Moreover, the church in Rome was full of people who were accustomed to defining themselves in terms of what they did as members of their community: the Jewish community, for instance, could be defined as those people who kept kosher and observed holidays like Passover. If there weren’t any standard community rituals, how could the community define itself? In other words, when Paul instructs the Roman church not to let their differences be a source of division, he is challenging some of their most deeply and dearly held beliefs.

Significantly, Paul does not challenge these beliefs in the name of mere tolerance. Though it may seem like his argument boils down to “can’t we all just get along,” his appeal to unity is rooted in something much deeper than any fortune cookie wisdom. “We do not live to ourselves,” he writes, “and we do not die to ourselves. If we live, we live to the Lord, and if we die, we die to the Lord; so then, whether we live or whether we die, we are the Lord’s.” Paul finds radical unity in our mortal nature: the fact that, no matter who we are or what group we belong to, we are all going to die someday. As consequential as our differences may be, all of them are overshadowed by our mortality. But Paul doesn’t leave us with this grim observation. Paul insists that this mortal nature we all share has been radically transformed through Jesus Christ. When Jesus Christ was raised from the dead, Paul reasoned that it couldn’t have been significant for just one person or even one group people; it had to have been a defining event for the whole of humanity, and indeed, the whole of creation. And in light of the world-altering magnitude of the resurrection, questions of group identity, once so pivotal, now feel parochial and unimportant. The resurrection puts the differences between us into an entirely new perspective. It invites us to consider our identity not in terms of which group we belong to, but in terms of the fact that we belong to God. Indeed, there is nothing and no one that exists apart from the parameters of “whether we live or whether we die.” We are Lord’s no matter who we are or what happens to us.

It would be nice if we could pretend that the issues surrounding divisions in our society don’t really matter, that we could live in harmony with our neighbors if everyone just stopped being angry for a moment. Most of us would agree that this is naive: the issues that divide us are anything but superficial. Besides, as Arthur Brooks pointed out a few months ago,“the real problem in [our society] today is not anger, it’s contempt.” He went on to define contempt as “the conviction of the worthlessness of another human being.” I find this diagnosis compelling, mostly because contempt has been the root cause of most of human history’s intractable divisions. We cannot defeat contempt by shouting down our opponents or even by making a more persuasive argument. As Paul implies, the only way to overcome contempt, the only way to acknowledge the worthiness of our opponents, is to recognize that we share something fundamental with those whose positions infuriate us. We must recognize that the Lord has laid claim to everyone who lives and everyone who dies. This is ultimately what loving our enemies is about: it is acknowledging the Christ died for them as much as he died for us. We are the ones who have to make this recognition. We are the ones who have to step out courageously and announce that even the differences that are fundamental fade away when we remember that we all belong to God.

Today’s post is going to be brief, as I not only have to put the finishing touches on a sermon, but also need to watch (need!) a very close national semifinal game between the Florida Gators and the Connecticut Huskies (go UConn!). 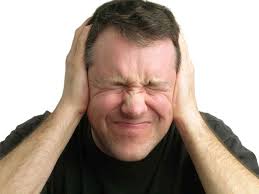 Though I’ve been watching the game on TBS, I’ve noticed that there are two other broadcasts available: one for Florida fans and one for UConn fans.  Presumably, the Florida broadcast will include commentators with a rooting interest in the Gators, while the UConn broadcast will feature people transparently supporting the Huskies.  It occurs to me that the existence of these team-specific options is symptomatic of a wider trend in our culture today.  Our society has become fragmented; we tend to spend time only with people we agree with and listen only to people who share our worldview.  This is part of the reason for the proliferation of news networks that cater to people of a particular political bent.  We would rather pretend that everyone agrees with us than engage in the challenging work of listening to people who do not share our views.

This is not a new issue.  The early Church had to deal with a huge variety of perspectives and understandings about how to be faithful to God: Should Christians be required to keep the Law of Moses?  Who has the authority to speak for the Church?  What should we do with people who have committed notorious sins?  Much of the New Testament is devoted to dealing with these questions.  In some cases, like in the letters of John, the solution is to exclude those who do not share the majority view.  In most other cases, however, we see the Church struggling to hold a variety of perspectives in tension, to include as many people as possible, and to recognize that unity can exist even with diversity.

In the Church (and the world) we must remember that we can be in relationship with one another even when we disagree or root for different teams.  Ultimately, we are called to recognize that our unity is grounded not in anything we have done, but in what God has done for us in Jesus Christ.