Sermon on John 20:19-31 offered to the people of the Church of the Redeemer in Bryn Mawr, Pennsylvania. 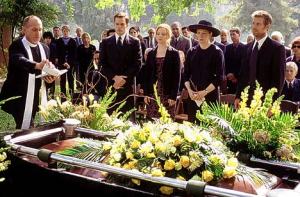 I have been to a lot of funerals. Even before it was part of my job, attending funerals was a regular part of my routine. I have been to so many funerals, in fact, that I have become something of a connoisseur. While I would never want to say that there is any such thing as a “bad funeral,” there are certainly characteristics that make some funerals less meaningful than others. In particular, a funeral is less than successful when it is dishonest. Perhaps the most blatant example of this is when a funeral fails to acknowledge that someone has died. I have been a few “celebrations of life” in which no one mentioned that person being celebrated had died. It was as if they were in the other room. As a result, the congregation was deprived of the opportunity to deal with that fundamental human dilemma of mortality. There is also a more subtle way this lack of honesty is expressed, and it often takes place during the eulogies. As we all know, there tends to be an informal process of canonization that takes place as people are eulogized at their funerals. The deceased is described in glowing terms: he was the kindest, most generous, hardest working, funniest, most devoted, most patriotic person who ever walked the earth. The few flaws he had were humanizing traits that made him all the more lovable. It goes without saying that these plaudits can sometimes ring hollow. This is especially true when the circumstances of someone’s death are painful, when there is a sense that everyone is ignoring the elephant in the room. Of course, no one wants to dwell on the negative, and besides, there’s no reason to speak ill of the dead. We can choose to remember the good about a person without dwelling on their flaws. Nevertheless, this dishonesty can be deeply problematic. When we ignore very human failings of someone who has died, we deny something fundamental about our humanity. Indeed, when we choose to remember only what we want to remember about a person, we limit our understanding of God’ power to redeem all our days.

Today, as we do every second Sunday of Easter, we heard the timeworn story of Thomas and his doubt. This story is so familiar that we can almost rehearse it in our sleep. Jesus comes among the disciples (except for Thomas) after his Resurrection, wishing them peace and breathing the Holy Spirit upon them. Thomas returns after Jesus departs, and the other disciples excitedly tell him that they have seen the Lord. Thomas refuses to believe it. About a week later, Jesus returns, but this time Thomas is there. Jesus invites Thomas to place his fingers in his wounds, and Thomas falls down in worship, saying “My Lord and my God.” It seems like a very simple formula: Jesus appears among the disciples, Thomas doubts that he appeared and demands proof; Jesus appears again, and Thomas believes. Thomas seems to be the hero of a skeptical age, a proto-agnostic who refuses to believe in the supernatural unless he is offered definitive proof. It would seem Thomas’ role in the gospel is to offer us concrete proof that Jesus was raised from the dead.

This interpretation, however, fails to acknowledge Thomas’ state of mind after the resurrection. Thomas makes an earlier appearance in John’s gospel when Jesus announces his intention to visit the tomb of Lazarus. The other disciples, full of trepidation, remind Jesus that this would be unwise, since the Judeans were just trying to kill him. But Thomas affirmed, “Let us go also, that we may die with him.” Thomas alone understood the danger of Jesus’ mission long before the road to Golgotha. Yet, just like the other disciples, Thomas vanishes when Jesus is brought before the authorities. Apart from Peter, Thomas is the only disciple who abandoned Jesus in spite of explicitly promising he would not. He was complicit in inflicting the wounds Jesus suffered on Calvary. Though we can only guess at what Thomas was feeling after the crucifixion, we can almost guarantee that he was a broken man, shattered by guilt over his infidelity.

All the disciples would have been experiencing some level of this guilt as they gathered in that locked room. They were paralyzed by fear and deeply aware that they had very recently abandoned their Lord and Teacher, the one who had called them friends. Yet John tells us that when the risen Christ appears in the midst of his friends, he addresses them, not with recrimination, but with words of peace. By way of illustration, he shows them his hands and his side. The wounds inflicted by the soldiers on Good Friday are part of Jesus’ resurrection reality. Christ’s dazzling resurrection body still bear the tokens of his passion. This is because the peace that Jesus proclaims is intimately connected to his wounds. Jesus does not use his wounds to condemn his disciples. He does not point to his hands and say “You did this to me!” Instead, he holds up his hands as if to say that God’s peace transcends even crucifixion, even the worst violence the world can inflict. 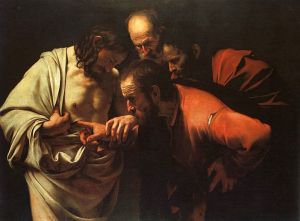 Thomas seems to implicitly understand this relationship between Jesus’ wounds and the peace he offers. Thomas doesn’t simply demand to see Jesus. He does not say “Unless I see Jesus in this room, I will not believe.” Instead, Thomas claims that he cannot believe that Jesus has been raised from the dead unless he puts his fingers in the wounds of Jesus’ hands and places his hand in Jesus’ pierced side. Thomas needs to see the wounds he was complicit in inflicting. In a way, Thomas does not doubt the resurrection; Thomas doubts that his faithlessness can be redeemed. It is only when Thomas sees the wounds of Jesus, when he traces the scars of his own infidelity, that he experiences the peace God offers in the resurrection, a peace that reorders and renews all things. The resurrected body of Jesus reveals something unexpected, yet elemental: God redeems everything about us, not just the parts we would like to have remembered at our funeral. In the resurrection, God redeems even our brokenness, even our wounds, even our deepest infidelity. The resurrection means that there is nothing in our lives that is outside God’s domain, that there is nothing we cannot bring before God, that there is nothing that cannot be redeemed.

This site uses Akismet to reduce spam. Learn how your comment data is processed.