Sermon on Genesis 9:8-17 offered to the people of the Church of the Redeemer in Bryn Mawr, Pennsylvania.  To hear audio of this sermon, click here.

Jill Price, a forty-something school administrator from California, remembers everything that has happened to her since she was eleven years old.  I want to make it very clear, I don’t mean that she has particularly vivid memories of her senior prom or the first time she travelled abroad.  Rather, Ms. Price remembers what she had for breakfast three decades ago. As a result of her unique and remarkable memory, psychological professionals have diagnosed Price with an otherwise unknown condition called hyperthymesia.  Others have simply and more romantically dubbed her, “The Woman who can’t Forget.”

Though some have questioned whether Price’s astonishing memory is the result of hyperthymesia or a form of obsessive compulsive disorder, the practical consequences are the same: Jill Price has an extraordinarily difficult time making decisions.  You might think that a long and detailed memory would be an advantage when dealing with a dilemma, that recalling a similar situation would give one perspective when making a decision.  For Price, however, the opposite is true.  She is so overwhelmed with memories that she has no idea how to discern which are important.  In other words, she lacks the crucial ability to forget. Neuroscientists contend that one of the reasons human beings forget is so that we can recognize the importance of what we actually remember.  Ironically, Jill Price’s paralyzing ability to recall every detail of her past effectively prevents her from remembering anything of lasting significance.  The flood of information about who she was prevents her from becoming who she is meant to be.

In Scripture, there is an interesting tension around the notion of memory.  On one hand, memory is held up as one of the primary virtues of the community of faith.  Israel, for instance, was commanded to remember its liberation from the land of Egypt.  Jesus commanded his disciples to eat the Eucharistic meal in order to remember him.  On the other hand, there are moments in Scripture when God’s people are exhorted to forget.  In Isaiah, the LORD instructs the exiled nation of Israel “not to remember the former things or consider the things of old.”  In his letter to the Philippians, St. Paul implies that the Christian life is about “forgetting what lies behind and straining forward to what lies ahead.”  The writers of the Old and New Testaments, in other words, indicate that there is a complicated relationship between faith and memory. 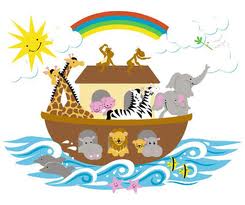 Nowhere is this ambivalence more clearly articulated than in the passage we heard from Genesis this morning.  The story of the flood is one of the most familiar in Scripture.  Not only is it an important reference point in the biblical witness, it is also an indelible part of popular culture; just think about how many nurseries are decorated with images of Noah standing on an ark full of smiling animals.  But there is a way in which the very ubiquity of this story has taken away its power.  For many people, the story of the flood is so familiar, so timeworn, that it has become cliched.  But it is important for us to see this story not as a mere fairy tale about a rainstorm and a boat full of animals, but as the foundational statement about the nature of God’s relationship with humanity.

The first pages of Genesis do not paint a particularly flattering picture of human beings.  After God creates the heavens and the earth in the first two chapters, it’s pretty much downhill from there.  From chapter 3 onward, all we read about is how human beings tried to put themselves in God’s place, whether it was Adam and Eve disobeying God’s explicit instruction regarding the Tree of Knowledge or Cain jealously murdering his brother.  The first chapters of Genesis describe a downward spiral of sin.  At the beginning of the flood story, the writer explains that “the LORD saw that the wickedness of humankind was great in the earth, and that every inclination of the thoughts of their hearts was only evil continually.”  As a result, God is sorry that he created human beings.  God’s heart is grieved that these beings created to have free will used that very freedom to turn away from God.  God is heartbroken, and God decides to start over, to give the world a new birth, to blot out what he had made and start again.

But here is the astonishing thing.  God decides to save a small group of righteous human beings, the very creatures who had abused their freedom and sent the world into a tailspin of destructive sin.  It is implicitly illogical.  God knows that when these creatures with free will are left to their own devices, they ignore God and turn toward themselves.  And yet, God includes them in the renewal of creation. Moreover, even though God was working with these same disobedient creatures, after the flood God promises “never again will all flesh be cut off,” that the world will never again be destroyed as a result of humanity’s disobedience.  The Hebrew word the writer uses also implies that as a result of this covenant, it is impossible for us to be completely separated from God’s faithfulness and love.  Notice that this covenant is completely one-sided.  It is not contingent on whether human beings shape up.  God pledges to remember this everlasting covenant regardless of our repeated attempts to put ourselves in God’s place.  It is here that the complicated relationship between faith and memory becomes most evident.  In order to remember this everlasting covenant with Noah, God has to forget the countless ways that God’s people have rejected him.  Indeed, the remainder of Scripture is the story of God’s repeated attempts to draw us to himself and our repeated failure to respond.  God made a covenant with Abraham, gave the Law to Moses at Sinai, brought God’s people into the Promised Land, instituted a monarchy, sent prophets to warn God’s people, placed them into exile, brought them back from exile and still we refused to respond.  Nevertheless, God was able to forget all of these rejections because they were overshadowed by the memory of God’s covenant with Noah: the foundational promise a that there is nothing we can do to cut off our relationship with God.

In many ways, Lent embodies the tension of faith and memory.  It is a season that begins with a potent reminder of our mortality and ends with a reenactment of the final days of Jesus’ life.  At the same time, it is a period when we forego certain aspects of our lives, forgetting, if only for a time, our typical routine.  This paradox helps us remember Lent’s true purpose.  Lent is not about giving things up in order to somehow please God.  Rather, this season is an opportunity to forget everything that distracts us from our relationship with God so that we can remember God’s enduring faithfulness.  It is a time to name and forget our failures so that they can be overwhelmed by the memory of God’s everlasting covenant.  It is a season that enables us to let go of who we once were so that we can become who we are meant to be.

Last week, the Church of the Redeemer was closed for a snow day.  Notwithstanding the limited accumulation (some clever souls dubbed the storm “The Fizzard of 2015”), there was something delightfully nostalgic about being “snowed in.”  The instant I discovered that our offices were closed, I was transported back to my childhood, to those wonderful moments when I looked out the window at a world blanketed in white and knew that the day was full of unanticipated possibility.

Of course, snow days can be slightly more complicated for adults.  They oblige us to reschedule meetings, ensure that our children are occupied, and deal with the anxiety of missing a day of work.  In spite of these these complications, we ought to view snow days with at least some of our childhood delight.  Snow days are unique opportunities to experience a true respite from our impossibly busy schedules.  We tend to fill other days off with chores and other obligations.  Since snow days are unanticipated, however, they are unencumbered by plans and expectations; they are opportunities to do things that we would otherwise not have time to do.  Snow days are a gift, and the appropriate response to a gift is gratitude.

Gifts often make us a little uncomfortable.  When we are given a gift, we tend to assume that we either do not deserve whatever we have received or that it was given out of a sense of obligation.  As Christians, however, we are called look at gifts in a different way.  Our faith affirms that God gives us the gift of his grace freely and without condition.  We are not meant to discern the reason God’s grace has been made known to us.  Rather, we are called to respond to this grace by gratefully acknowledging that our lives have been changed through what God has done for us in Jesus Christ.

One of the ways we exercise this gratitude is through the practice of Sabbath.  Sabbath is an opportunity to remember that we are called to put our trust in the God who created and redeemed us.  Sabbath is a way of pausing in the midst of our busy schedules so that we can move from a place of anxiety to a place of peace.  Like a snow day, Sabbath is meant to be a gift, a chance to give thanks for the grace that God has so freely given us.